This week in chapel they’ve started a new series on What If, which I guess is basically just encouraging students to ask the hard questions. I missed Monday’s chapel because I was not feeling well and needed to sleep, but I was glad I went to today’s!

Today’s came to us in three sections:

Sin
Pain tells you that something is wrong.
Because sin exists. (Why pain happens.)
Spiritual warfare.
Prayer – Elisha – 2 Kings 6:16-17
Be a people of prayer.
We have the authority to kick Satan in the teeth.
Death was swallowed up in victory.
Satan can’t kill a soul rooted in Jesus. (That’s us.)
Sin = chaos
Adam blamed Eve, Cain killed Abel (immediate)
Romans 8 says that creation is moaning. Our speaker likened that to natural disasters.
Revelation 21:4
So why does God allow it?
He loved His creation. He’s not a puppet master. We’re not robots.
That kind of love demands the freedom to choose. And to God, it was worth it.

Chaos
mystery <– free will ; Chaos Theory
Life is a series of intercepting incidents.
He used this image of pebbles and a pond. When you throw one pebble into a pond, you can see where one set of ripples begins and ends. But throw 7 billion pebbles in that pond at once, and it’s chaos. The ripples intercept. 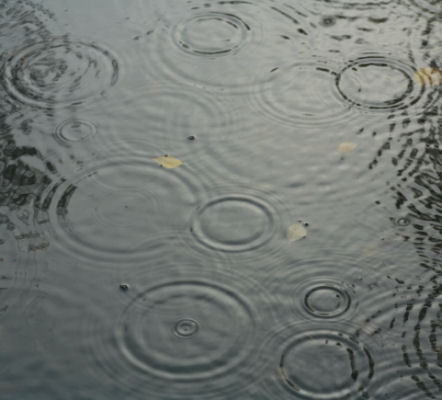 God
Pain is sometimes necessary.
Each person makes approximately 8000 decisions per day. Each of those decisions help shape who we are.
If your heart is calloused and hardened, God can’t mold it.
But there’s hope–hope that came at a price.
CS Lewis once said/wrote, “God whispers to us in our pleasures; speaks to us in our conscience; but shouts in our pains–it is His megaphone to rouse a deaf world.” (Absolutely love this.)
Ripping out and fixing a fake heart is painful, but it’s a loving and necessary process.
Hebrews 12:10-11
Our speaker said that the other day he had to put his son in “Uh-oh time” because he did something wrong. And his son wasn’t happy about it. But you know what, that’s how it has to be sometimes.
He spoke about the question “Why do bad things happen to good people.” He told us that this question assumes that “good” people are entitled, and said that instead, we should be asking this:

Why do good things happen to bad people?

(Because we don’t deserve grace, and yet we’re given it.)
There is something to be gained from troubles and trials.
Then he shared a quote that said something like “We are all like pigs: we only look up when we’re flat on our backs in the mud.” (I don’t remember the exact quote, but it’s something like that.)
The nature of God’s goodness? God DEFINES good.
We think of “good” as the absence of pain and suffering. That’s not it at all.
God is good and He is present. (Always.)
We are not alone or abandoned. God enters into our pain with us and does something about it.
And we serve Jesus. Our Jesus, who suffered for us, who took it all for us without complaining about it.
Romans 8:17
Philip. 3:10-11
Not the end of the line. New creation.  Dawn is coming. There will be a day.
We can enter into other peoples’ sufferings with them, extend life and joy and praise and hope.
Habakkuk 3:17-19
We have a unique perspective to share. Let’s go share it.

All right, so I fibbed—without realizing it. My sermon notes weren’t thrown away, they were just hiding! So here’s Sunday’s sermon!

Pastor C (she’s in charge of ministry for children ages 5 to about 12) spoke on the ways that God speaks.

She opened with a story about how she was the guest speaker at our Bible Camp one week in June, and there she spoke about David. She did an 8-lesson series for the kids (that’s eight chapel sessions in a week–two a day except for the first and last days, I think) on David, and a couple of the things I wrote down from her “review” of David’s life (because we covered David in a series last summer) were:

17 – 30 = 17 years (How long David had to wait from being anointed as king to actually taking the throne.)
Wouldn’t you question God in 17 years of waiting?
David knew that life is not like Burger King—you cannot have it your way. He knew that he was young and had much more to learn and experience before he would be ready to become King. He knew that he had to wait and see, that it would come in God’s time.

Then Pastor C went into the actual sermon, talking about Six of the Ways God Speaks.

1. God speaks through His word.
2 Tim. 3:16
Psalm 119:105
Here she went into her story of being called to be a pastor. She’d been a teacher until 11 years ago, and being a pastor had never even crossed her mind. But an opening showed up at our church and she, with support from her husband (also a teacher), decided that it might be something she could do. It was children and adults, and she’d only really worked with children, but she felt called to it. She applied in May, and by the time July came around, she realized the church wouldn’t be getting around to hiring anyone until fall. She had to make a choice: continue teaching, or resign to wait for word on the job. She resigned, because she wanted to be available to what God had in store. She told us that Isaiah 49:9-10 became her life verse that summer, particularly after she turned to it while praying one morning.

2. God speaks through gifted teachers.
Eph. 3:11-12
She said here that a gifted teacher has a way of making you feel as though you’re the only person in the room, like they’re speaking directly to you and no one else. That’s how you know it could be from God—if it lines up with Scripture, of course.
I know this has happened to me a few times, where I’ve felt as though the pastor or whoever was speaking was looking right at me and no one else, or was speaking directly about something that was happening in my life right then.

3. God speaks through Godly friends and family.
Prov. 12:26
Prov. 12:15
David had Samuel and Jonathan.
Prayer from others helped with Pastor C’s stress levels while she prepared to speak at Camp.

4. God speaks through impressions from the Holy Spirit.
John 14:26
Romans 8:16
Trouble is, you have to be able to say that it’s actually from the Spirit, not just something you really want to do.

5. God speaks through pain.
Psalm 119:71
I thought of Romans 3:3-4 here, too.
The Gospels say something about taking up our crosses daily. Pastor C asked where Jesus was headed when He was carrying His cross. Answer? Crucifixion. Death. She mentioned that we need to be ready to suffer, but no worries—Jesus is always there.
She shared about a health issue her husband has, and how even in the uncertainty and all of the medical bills, God met their needs through friends who provided meals or money to cover bills. They never lacked food, they never missed a payment. They were taken care of.
She said this: We were not born for what we would gain here on earth. We were born to learn and love and trust God. (Sometimes that trust comes through painful or uncertain situations. [Hope you don’t mind me linking to that one, Dylan!])
One other thing Pastor C shared here: CS Lewis has an awesome quote about God speaking through pain: God whispers to us in our pleasures, speaks to us in our conscience, but shouts in our pains; it is His megaphone to rouse a deaf world.
That makes so much sense to me. So many people blame God for the bad in the world, and ask things like, What is He doing about the suffering? or whatever. I sometimes feel like telling them that perhaps that’s a question God wants to ask them. If you see something that moves you to tears (of pain or anger or frustration), DO SOMETHING. Perhaps that is how God will work in that situation, THROUGH YOU. Sometimes the people in charge need a little help from their “underlings,” you know? God could take care of everything and make it so that nothing bad ever happened, but then we wouldn’t know how truly great He is. We would never call out to Him during times of trouble; we would probably get used to a world without pain, and we would forget to praise God in the good times because the good times are all we know. Does that make sense?
That wasn’t in the sermon, but I wanted to share it anyway.

6. God speaks through silence.
Psalm 27:14 — David wrote this as the conclusion to the 27th Psalm. He waited, but he didn’t just sit around while he was waiting. It reminded me of this song.
Job 34:29 — First, you have to remember Who is in control, who rules. Then, you have to trust Him.
Psalm 9:10
Psalm 50:14
You are waiting because the answer is either yes, not yet, or you are not ready for the answer and you must grow first.

At the very end of the sermon, Pastor C brought up that we have to be on guard because Satan is always nearby or something—something about Satan, which segued into The Armor of God. A few of the students who were at Camp the week Pastor C spoke came up on stage with her and did The Armor of God song (to the tune of The Macarena!). This is one of the best videos I’ve found so far on YouTube of the actions and the lyrics:

I’ve seen this done before, usually when one of my favorite church guys (who’s older than my dad!) sings the narrator stuff in a Jamaican accent. 🙂

Tonight we were supposed to have Junior High youth stuff after not having it for two weeks, but we ended up cancelling because only one student showed up. 😦 I was looking forward to seeing some of our kids again after a couple of weeks away, but I guess not. Hopefully next week more will show up!